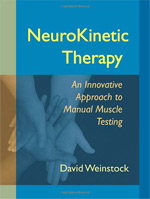 If you’ve been following me on social media, then you know that I recently took an amazing class called Neuro Kinetic Therapy (NKT). NKT is a method of assessment and treatment created by David Weinstock. I first became aware of Weinstock’s system several years ago as I was researching other modalities and ways of thinking concerning sports medicine and the human body as a living, moving thing. Most of the information on anatomy is based on the observation of cadavers, dead and lifeless bodies with no active nervous system, and no life force, no qi. While cadaver dissection allows us to look directly into the structure of the human body, observing how everything is put together, it doesn’t tell us a lot about those structures function in a living person. Yes, we can tell by the tendon connections and by the orientation of the muscle fibers that the biceps muscle makes the elbow flex, but who does anything (other than lifting a dumbbell) that involves just flexing the elbow? In the way we actually move, the elbow functions as part of a chain of muscles (a “kinetic chain”) that starts in the shoulder or even the chest and moves down the rest of the arm which function together to lift or wave or throw. This is exactly the conceptual framework which David Weinstock has built NKT.

NKT – What it’s About

When I discovered this idea of kinetic chains it made perfect sense to me as an acupuncturist, because the acupuncture meridian system is such an obvious parallel to these chains of movement. At the same time, the idea completely blew my mind because meridians aren’t discussed this way in acupuncture school (though I feel they should be) with this idea of movement planes and muscular chains. So when I ran across Weinstock’s work in my exploration of this concept, I started following him and bought his book which outlines his NKT method. Unfortunately, there’s only so much one can learn from a book; plus one problem for me was that the class is quite expensive (as it seems most of the top-level information is) and as Mr. Weinstock does not market himself to acupuncturists, the class does not satisfy the continuing education requirements to keep my license current; so, taking the class was not a top priority for me, but I knew I had to take it eventually.

A couple weeks ago, I finally managed to take this class. Mr. Weinstock finally offered the class in Southern California and so I spent a weekend with a bunch of physical therapists, chiropractors, and personal trainers learning this amazing technique. Now, I’ve been using this information for several years, but as it turns out I wasn’t quite using it right. I was exposed to muscle testing by a couple of my orthopedic acupuncture teachers in the past, but the technique they used involved a lot more force than is used in NKT, which starts with a very light touch, which I feel fits my style of treatment and assessment. The idea behind this light touch is that if a person can’t resist such a light pressure, then the neural signal to their muscle is compromised, or in Chinese medicine speak, the qi of their muscle is stagnant or deficient.

Though Weinstock doesn’t talk in Chinese medicine terms, his basic premise fits quite well into the TCM paradigm. Basically, NKT states that due to pain or patterns of compensation or postural habits, one muscle might stop working properly, which means that another muscle has to take up the slack because we still have to move and our muscles still have to hold our skeleton up. The terms used in NKT are “inhibited” for a muscle that’s not firing right and “facilitated” for the muscle that’s working too hard. This fits the Chinese Yin/Yang model quite well, the inhibited muscle being yin and deficient, while the facilitated muscle is yang and excess.

I’m very excited to have this technique in my “bag of tricks.” I feel it fits so well with the way I practice and with the way I look at the body and I can tell that it will lead to better clinical outcomes for my patients. Getting the hang of this technique will take some practice and study, but I am definitely up to the task! On the subject of more study, one book that was significant in Weinstock’s development of NKT is The Neural Basis of Motor Control by Vernon B. Brooks. This book is unfortunately out of print, but there are a couple used versions on Amazon for $400! That being just slightly out of my price range, I had to be a little resourceful and I managed to find a copy at the library of my undergrad school, UCLA.

Stay tuned for more information on this subject as I will certainly be writing more as I integrate it more deeply into my practice.